About three years ago I did a post on triangle formations. I looked at success rates and profit potential of playing breakout of them. You may view those previous findings here. Last night in the subscriber letter I took a new look at these formations and what a break (like we saw yesterday) might mean.

For coding purposes I simply defined a triangle as a pattern where the most recent swing high was lower than the previous swing high, and the most recent swing low was higher than the previous swing low, and the market was currently between those two points. This admittedly isn’t the most sophisticated description, and some market technicians might suggest additional nuances should be included. Still, it seemed to be enough to identify the basic pattern of a tightening range.

Once entered the strategy was designed to exit when price either reached its target or its stop area. To calculate the target price I simply took the height of the triangle and extended that past the entry point. The stop was set at the opposing swing high or swing low that would have triggered an entry in the opposite direction had the triangle broken the other way. No trailing stops or other trade management techniques were incorporated.

Results in general were much like those results I discussed 3 years ago. I did break it down a number of different ways, though. One interesting set of results came from looking at triangle breakdowns in the SPX when it was in a long-term uptrend. Those results can be seen below. 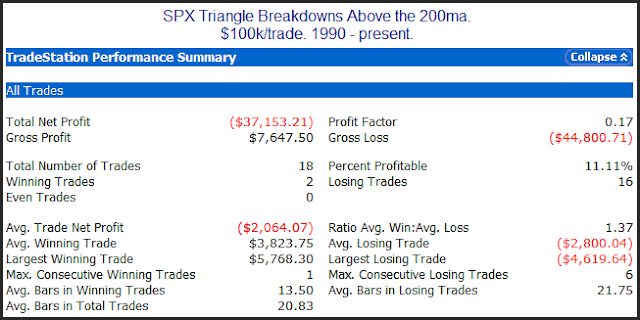 Entries and exits are as I described above. So in this case the results show the performance of shorting a breakdown. As you can see there has been an strong tendency for this trade to reverse back up and be stopped out before reaching its downside target.

More information on triangles can be found in last night’s letter. Subscribers are also being provided with the code so that they may explore triangle formations more on their own. If you’d like to read Thursday’s letter just click here to register for a free trial.