Check out the new Seasonality Calendars! 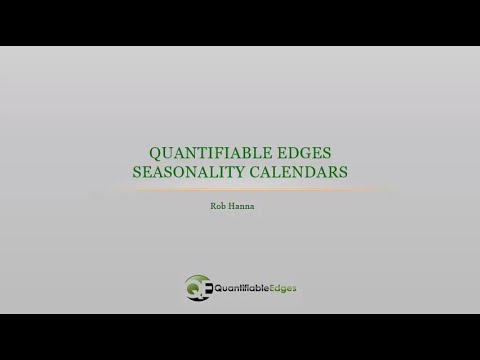 Quantifiable Edges has been publishing quantitative research, systems, and trading ideas since 2008.  We utilize technical analysis concepts and quantify them in a way that allows traders to determine the edge that was provided in the past.  Breadth, volume, sentiment, volatility, Fed-induced liquidity, seasonality, and price action are all used to assess market conditions.  Gold and Silver level subscribers are led through Rob Hanna’s interpretation of the data in a simple and complete manner via the nightly and weekly subscriber letters.  Gold subscribers also have complete access to our subscriber area, which includes the Quantifinder, Seasonality Calendars, custom charts, trading systems (with code), special research, and more.

Both private and institutional traders have taken advantage of the vast tools and studies that have been developed over the years. Some of the most popular indicators include the Quantifiable Edges Capitulative Breadth Indicator (CBI) and the Aggregator. Quantified research related to Fed policy and action around Fed Days is available. Subscribers also have access to the full archive of letters back to 2008, which include thousands of original studies.

Additionally, Quantifiable Edges provides unique courses for longer-time market timing and quant-based swing trading. Both self-paced courses include detailed market research, and show traders how to take advantage of it. They also come with supporting software for those traders interested in furthering the research and ideas on their own.

Beginner, advanced, and institutional traders have all taken advantage of the research, teachings, and tools provided by Quantifiable Edges since 2008. Free trials to the gold subscription service are offered with just name and email required. You may follow Quantifiable Edges on Twitter (@QuantifiablEdgs), Facebook, LinkedIn, or receive blog posts and updates from Quantifiable Edges directly to your email.

SPX will post a Golden Cross on Thursday afternoon. A Golden Cross occurs when the 50ma crosses over the 200ma. Having the 50ma above the 200ma is commonly considered a bullish market condition – and generally it is. In the 7/9/20 blog post I looked at SPX Golden Crosses dating all the way back to 12/31/1928. I have updated that research tonight with Amibroker Software and Norgate Data. Below is a list of all Golden Crosses since then. (Note that prior to 1957, S&P 90 data was used. The S&P 90 is considered the predecessor to the S&P 500.)

Since the 1961 trigger, the Golden Cross has generally served as a fairly good timing device to sidestep large portions of bear markets.  Prior to that it was not nearly as effective. This can be seen in the drawdown chart below.  (Note: Overnight Fed Funds rate was used to calculate nightly interest starting in July 1954, which is as far back as my data goes. Prior to that, no interest rate was assumed when out of the market.)

While drawdowns have been mostly fairly moderate since the mid-50s, prior to that there were some very large drawdowns to endure. The 2020 drawdown was the biggest since the 40s.  Despite some fairly sizable drawdowns, the Golden Cross would have beaten “Buy and Hold” handily. Over the time period measured, the SPX had a compound annual growth rate (CAGR) of 5.57%. Simply incorporating a Golden Cross filter would have raised the CAGR to 7.25%. It is a bullish long-term trend indication.  But it is not a bulletproof long signal.

An Unprecedented Breadth Trifecta has Triggered

On Thursday afternoon I witnessed 3 different breadth thrust signals I watch all trigger on the same day. The signals, with link to learn more about them are:

The signals on their own all have impressive track records, which you can see if you click through to the links. When 2 combine, it has been almost perfect 1-12 months out. All the recent breadth certainly seems to be a positive.

Webinar - Using Elevated Interest Rates and Volatility to your Benefit

I am pleased to announce I intend to kick off 2023 with a new webinar for followers, “Using Elevated Interest Rates and Volatility for your Benefit”.

On Friday 1/13 at Noon EST, and then again Tuesday the 17th at 4:30pm I will be hosting a special free webinar where I will discuss an approach to utilizing current elevated interest rates in conjunction with VIX option models as a compelling strategy. Details can be found below.

If you would like a link to the recording of the webinar, simply register here. Recordings will be sent out Tuesday night.

Description: The webinar will cover the following topics:

The webinar will be recorded and all who sign up will receive a link to the recording.

I’ve posted and updated the “Twas 3 Nights Before Christmas” study on the blog here several times since 2008. The study will kick in at the close today (12/21). This year I will show the Russell 2000 version of the study. While all the major indices have performed well during this period, the Russell has been among the most consistent.

The stats in this table are strong across the board.  An average year posted a gain of about 2.1% over the next 8 days. The note at the bottom shows the reliability of a bounce at some point has ben incredible. Traders may want to keep this study in mind over the next several days.

I’ve heard people saying recently that the typical 2nd half of December bullish tendency is unlikely to unfold this year. The theories suggest that the market is often up on the year. And people and institutions flush with profits tend to push it higher as the New Year approaches. There is also lots of buying chasing strong market returns heading into year end. But when it is a down year like now, players have losses, and less liquidity, and there is also tax-loss selling. All this creates selling pressure, so the bullish end-of-year turns bearish. I tested it. I looked at all other years since SPX inception in 1957 that SPX was down at least 12% (it is currently down 19%) on December 16th. If December 16th fell on a weekend, then it looked at the next trading day. The test bought on the 16th (or just after) and sold on the close of the 1st day of the New Year. Results below.

The theory sounded nice. I see no evidence that it is true. Eight of nine instances saw SPX move higher, and the lone loser only lost 0.15%. I see no reason to throw out seasonality studies this year just because the market is lower.