Last week I looked at trending vs. chopping tendencies for the market in both the daily and intraday timeframes. What I found is that in both time frames the market has evolved from trendy to choppy over time. Today I am going to look at weekly bars. I will also have some further follow-up later this week which look at the statistics of some of the “Trend vs. Chop” results.

I’m going to use the same “system” as last week to display weekly tendencies. The first test here buys on the close of any up bar and reverses to short at the close of any down bar. Like last week, the trades were at a constant $100,000 per trade for the entire period. No commissions or slippage are figured in to the test. A rising graph would indicate follow through is dominant while a falling graph would indicate reversals are dominant. Sideways action would suggest no tendency. 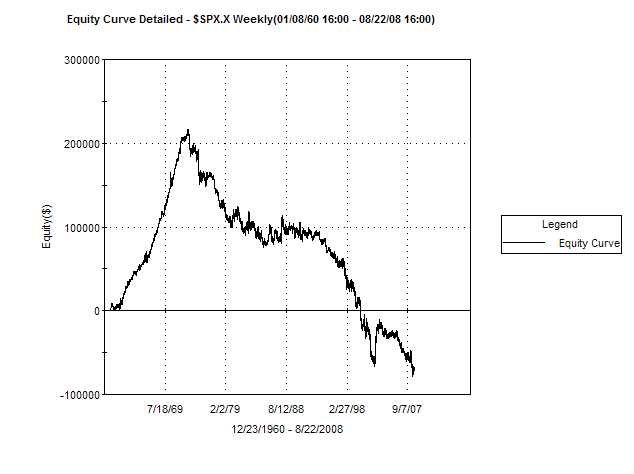 Unlike the daily and intraday time frames, which favored trendiness through much of their history until fairly recently, the weekly timeframe has been more prone to chop since the early 70’s. 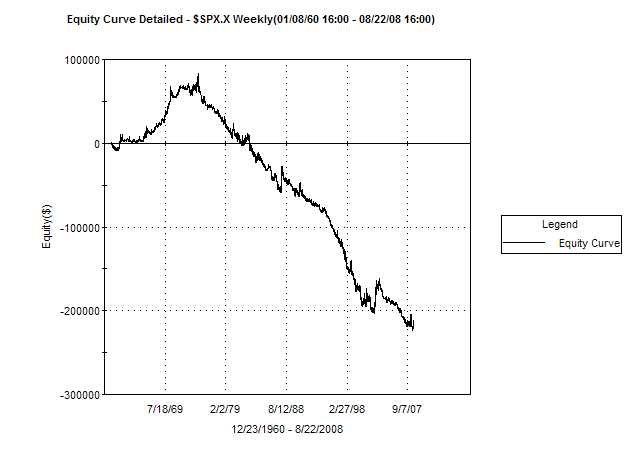 In the bear market of the early 70’s this was profitable as the market tended to show persistent weakness. Since then, with the exception of a few short periods during bear markets, buying the dips has worked quite well.

Now let’s look at what happened if you looked to buy strength: 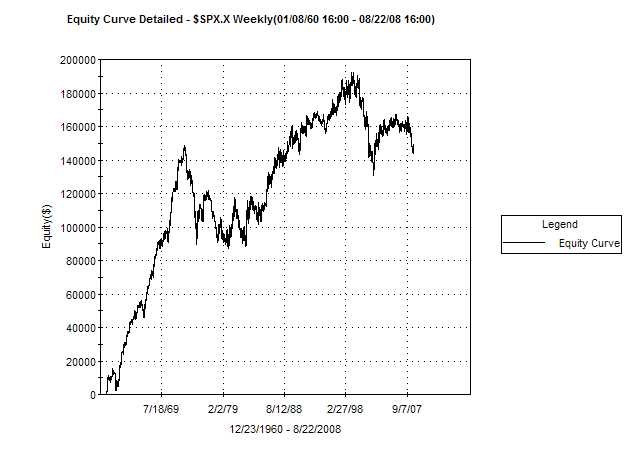 Upside follow through was strong through the 60’s and until January of 1973. That is where you see the peak near the left hand side of the graph. Since that time the market has gone through cycles that sometimes favored buying strength and sometimes favored selling strength. Thirty-five years later the equity of the system is right back near its peak 1973 level. It should be no surprise that the current spike down began in 2007.

These results shouldn’t come as much of a surprise to people who have spent time evaluating or developing swing-trading systems. When trying to take advantage of 3-5 day moves, it is generally easier to develop long-only strategies that perform relatively well over time than to produce short-only strategies that perform consistently well. Hence a big reason you see so many more long-only systems. Of course in 2008 so far shorting strength has been easier than buying weakness.