On March 2 I discussed a setup in which the NYSE TICK manages to trade above 0 for the entire 1st 30 minutes of the trading day.  Such a setup used to suggest bullish implications, but that no longer appeared to be the case.

I also have an old study that looks at the other side of the coin.  What if TICK goes the 1st 30 minutes and trades BELOW 0 the whole time?  This NEARLY triggered this morning.  The TICK managed to move up through 0 in the 30th minute.  But let’s take a look at it anyway.

In the past I have shown this to suggest bearish implications.  Here is an updated look at those statistics:

Everything here still suggests bearish implications.  An average loss of an “additional” 0.75% between 10ma and 4pm is quite large.  But let’s take a look at the equity curve to see how the edge has played out over time. 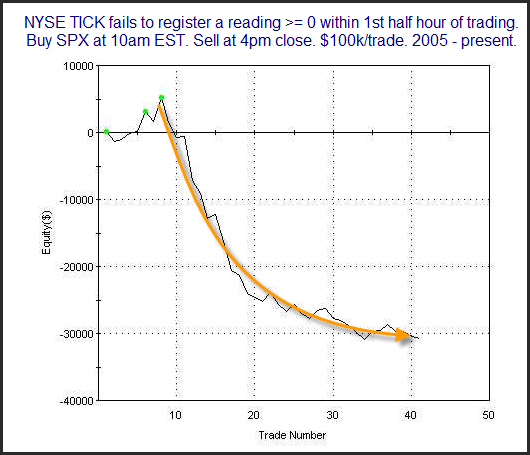 While recent instances have not been as powerful as some we saw in the past, the downside still appears to be intact.  It may be waning, but it still appears prevalent enough to raise a red flag.

So did we narrowly miss a bearish setup, setting the stage for an intraday rebound?  Or was this one close enough that the bears are likely to remain in control the rest of the day?  We’ll find out in a few hours…