With the calendar moving from October to November, it has now entered its “Best 6 Months”. The “Best 6 Months” tendency was first published by Yale Hirsch, founder of the Stock Trader’s Almanac, in 1986. The concept behind the “Best 6 Months” is simple. Seasonality suggests that over the last several decades the market has made a massive portion of its gains between November and April. And during the remaining 6 months, it has generally struggled to make headway.

When the Best 6 Months and the 3rd Year of the Presidential Cycle have been active at the same time, the results since 1960 have been outstanding. In the table below I have listed out each instance. 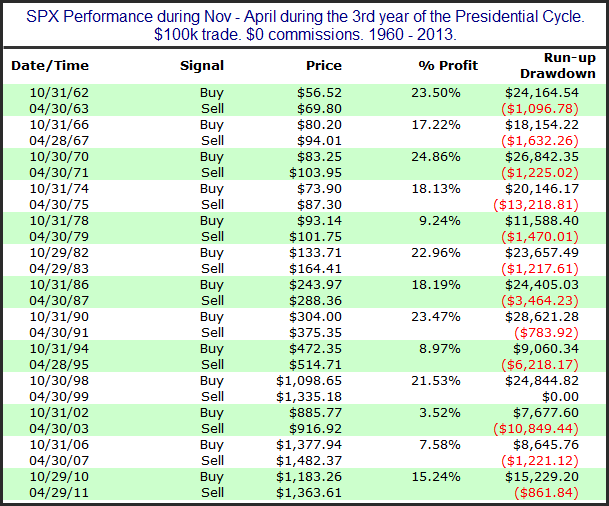 Much more information is available on these indicators in the Quantifiable Edges Market Timing Course. Also included in the course are price-based indicators that combine very well with the seasonals, along with possible long-term approaches to utilizing different combinations of price and seasonality. Code, supporting spreadsheets, and access to pages with indicator updates are also included in the course. For detailed information and to order you may use the link below:
https://quantifiableedges.com/subscribers/signup/MarketTimingCourse