In the 1/20/09 blog eight years ago I looked at inauguration day returns. I examined whether a new president brought about new hope and optimism for the market.

I limited the instances to only those inaugurations where a new president was entering office. I don’t think re-elections carry a sense of “new hope” the way a new president does. I also eliminated inaugurations of Presidents that weren’t elected (Ford in ’74, Johnson in ’63, Truman in ’45, and Coolidge in ‘23). I just don’t believe the same sense of excitement is generated by a replacement as by a newly elected president.

First I looked to see how the market performed on the day of the inauguration. Surely the wonderful speeches and overall positive vibes would have had a positive effect on the market: 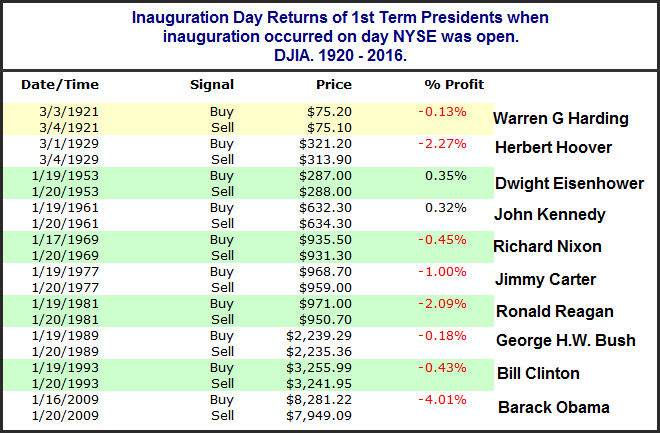 Then again, perhaps not. Eisenhower wins the award for most market-friendly speech by juicing the Dow for 0.35%. Obama was the biggest loser with a 4% drop on his inauguration day. George W. Bush and Franklin Roosevelt are not included on the list since their 1st inaugurations were on weekends.

What if we look out a little longer, though? Buying on the close of inauguration day (or 1st day after for W. Bush and Roosevelt) and holding for 10 days offered significantly more positive results:

The 10-day timeframe has shown some very positive results. For an intermediate-term perspective below are the results for the 1st 75 trading days of the new presidency: 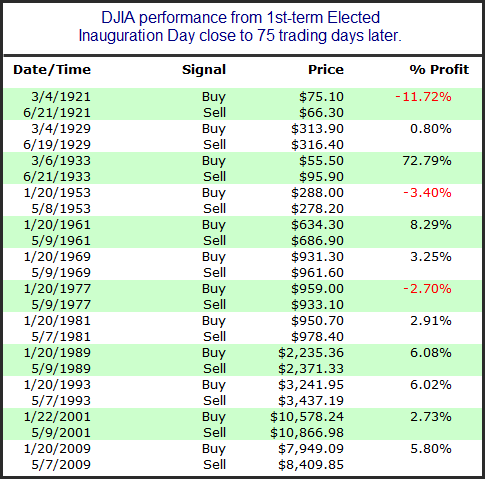 Mostly positive here as well. Of course the main issue with this line of tests is that we are dealing with only 12 instances in 98 years. It would be quite dangerous to base any trades on just these results.

About the author: Rob Hanna