Last Thursday I showed an incredibly simple system with outstanding performance over the last 15 months. It basically sold short any time there were 2 up days and looked to exit at the 1st profitable close on or before day 4 – at which time it would exit no matter what. Incidentally, today’s drop would’ve been yet another winner for the system.

It’s not terribly surprising that a short-selling system has performed well over that time period. Fairly amazing is how a long-oriented system based on the same ideas can output numbers nearly as good. Below are system criteria reminiscent of last week’s studies:

Exit Criteria:
1) If the S&P closes above the entry price of the trade, sell on close. 2) Sell on the close of day 3 regardless of profitability. 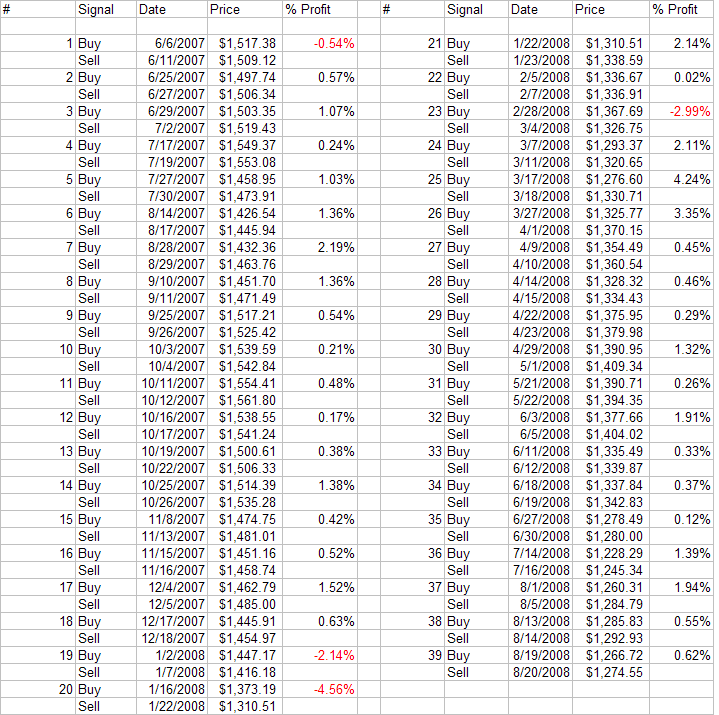 Once again I should note that this system is a product of the environment and not a well-designed trading system. Entry and exit techniques are too raw for actual decision making.

That said, results were fairly impressive. There have now been 16 winners in a row going back to February and the market has seen a difficult time during that period.

Now that we’ve had two down days it’s likely a poor time to try and jump to the short-side. Those that are already short may want to consider taking profits. Traders could also begin thinking long in the next day or so.