It is worth noting that Friday is the last trading day of the quarter. And the last day of the quarter has some interesting characteristics. I often hear the term “window dressing” mentioned by the media when referring to end of quarter activity. The suggestion is that fund managers will make late adjustments to their portfolios, in order to make them appear more attractive. So their list of large holdings might show some strong winners instead of losers for reporting. And they might do some extra buying of certain holdings on the last day or so of the quarter in order to push the price higher. Exactly what activity will be undertaken is difficult to anticipate, but one thing I have found is that small caps tend to outperform large caps on the last day of the quarter. This can be seen below in the comparison of DJI to Russell 2000 returns since June of 1987, which is as far back as my RUT data goes. 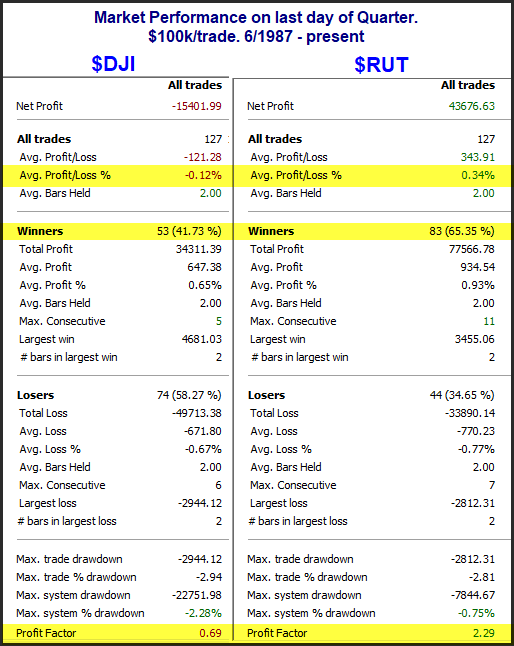 That is a sizeable difference in performance. On average, the Russell has outperformed the Dow by 0.5% on the last day of the quarter, looking back to mid-1987. As a pair, the Russell has outperformed the Dow 75% of the time, and gains on winning pairs trades would have outsized losses on losing pairs trades by over 4:1. A little something to keep in mind this afternoon as you prep for end of quarter tomorrow. Note: More details about this were provided in last night’s subscriber letter. To see them, you may take a free trial.