Notable on Friday was that the 50-day moving average of the SPX closed below its 200-day moving average. This is often referred to as a “Death Cross”. (When the 50ma is above the 200ma that is a “Golden Cross”.) This is the first Death Cross since early 2012. Let’s take a brief look at Death Crosses for SPX and see if they have lived up to their name.

As you can see, this would actually have been a winning strategy over 71% of the time. The problem is the losing trades were very large, with the largest being almost a 40% hit. It also needs to be noted that the above stats are not compounded. They just look at $100k/trade. If we reinvest all the gains & losses, the impact of the giant losers becomes more pronounced. Below is a profit curve for a hypothetical portfolio taking these same trades that includes compounding. 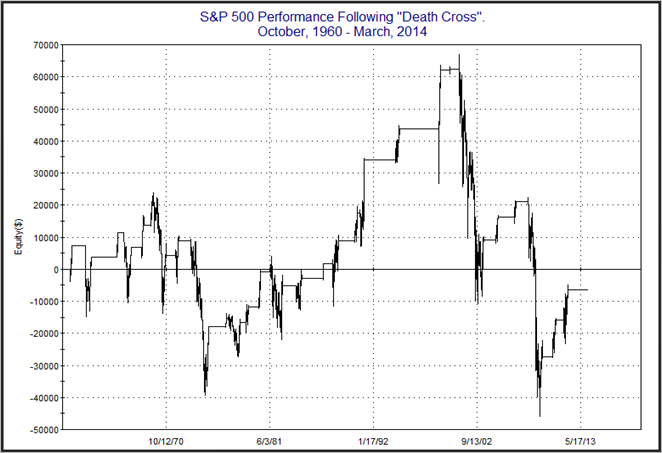 As you can see the net result since 1960 would have been a loss of 6.35% to the hypothetical portfolio. (Assumes no interest while out of the market, and no other expenses.) So most of the time the Death Cross turns out to mark nothing more than a moderate market correction. And long-term traders would be better off riding out that correction than jumping in and out based on the Death Cross / Golden Cross formation. BUT there is a risk that the correction could turn into a nasty bear. In those cases, long-term investors would get slammed. And it does not take many big bear markets to ruin the long-term profit curve. So while not a reliable timing device, it is notable that the market has failed to generate long-term profits under the Death Cross. Traders that are concerned with preserving capital could utilize Death Crosses to possibly avoid big portions of nasty bear markets.