Last week was the 1st in which the SPX failed to make a new high since November. Prior to this it had been 12 straight weeks of higher intraweek highs. In last night’s subscriber letter I took a look at other times similar streaks existed and what happened after they ended. Below is a study that showed results of instances with at least 10 consecutive higher highs. 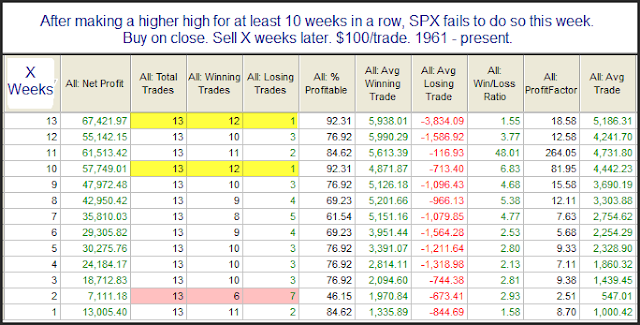 It’s tough to draw too much from the low number of instances. Early indications suggest the market is not immune from a short-term pullback, but that past instances have not marked major tops. If you want to take a closer look at other instances like the present where the SPX made higher highs for at least 12 weeks before faltering, it occurred on 11/5/65, 3/17/72, 1/8/93, 8/15/97, and 4/17/98.

A theme I have found in my research is that persistent uptrends rarely end abruptly. Often they will chop for a while and lose their persistence before rolling over. While much of this research has been focused on the daily timeframe, studies like this suggest it may also apply to weekly timeframes as well.