While 2008 was an incredibly difficult year for buy and hold, it was an especially good year for the Quantifiable Edges Subscriber Letter. The trade ideas listed in the Letter are generally short-term in nature. They come from either mechanical systems that are published by Quantifiable Edges, our proprietary Catapult system (which is used to measure the CBI), or as index trades through our detailed market analysis and studies. Only large-cap stocks (primarily S&P 100) and highly liquid ETF’s are used for the trade ideas. This helps to assure subscribers wishing to trade some of the ideas that liquidity won’t be a problem.

The trades ideas that are most popular among subscribers are the studies-based index trades. Frequently I will use the Aggregator tool to help time entries and exits.

After several inquiries I have decided to simply show a listing of all the index trades closed in 2008. A few notes:

I typically scale in to index trades. Most often ¼ at a time. Therefore in the listing below you will notice there were times where more than 1 entry was open at once. The max is 4.

These are just trade ideas. I never suggest allocation percentages. A ¼ index position could mean a 5% allocation to one person or a 75% allocation to another (who may eventually get 300% or more leveraged).

The index trade ideas are tracked using either SPY or QQQQ. Some subscribers may use options, futures, inverse or ultra ETF’s or some combination of the above to better suit their trading. I never suggest ultra etf’s in the Subscriber Letter. While I believe they are a worthy trading vehicle and utilize them myself on occasion, I prefer not to use them in the trade ideas section as it could appear I’m simply trying to inflate my results.

So while personal results would vary greatly depending on the traders approach to the ideas, below is the complete listing of closed index trade ideas from last February’s inception through the end of 2008 (Summary results shown further down. Commissions not included.): 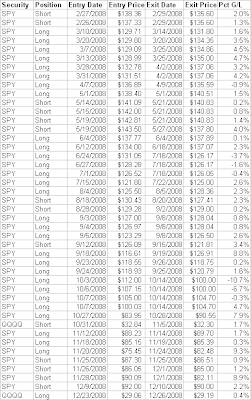 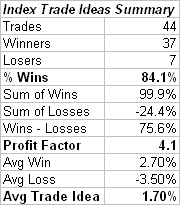