A couple of weeks ago I noted the weakness in the Quantifiable Edges Nasdaq Volume Spyx indicator that suggested the market may be nearing a multi-week pullback. While volume issued a warning, price and breadth remained strong and showed no sign of rolling over.

I’m now seeing some hints via price and breadth that there may be a change in character occurring. The uptrend appears to be weakening at the least.

Wednesday marked the 3rd lower close in a row for the S&P 500. This is the 1st time the market has pulled back for more than 2 days since the March bottom. A move below 882.52 on Friday would mark the 5th consecutive lower low. Coming off a 50-day high that would not be a good thing. Strong markets shouldn’t make 5 consecutive lower lows. That will often lead to even lower prices over the next few weeks. 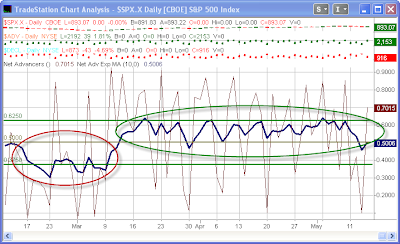 After the March bottom the 10 ema moved up sharply. Except for one day, April 30th, is has remained above the 50% line. On Wednesday that line was again breached. It did barely recover 50% on Thursday. I will be watching to see if the 50% level can hold over the next several days. Failure to do so would be another indication of a change in market character.

The market is starting to show some weakness in ways it hasn’t since the March bottom. This doesn’t necessarily mean a sharp or sustained pullback will ensue (although there are some clues that it could). It does suggest caution is warranted and traders may need to examine long positions with a more discerning eye than has been necessary in the last 2 months.